As the 675 GSMST VEX Robotics organization, we have never failed to qualify for the VEX Worlds Competition since our creation. Recently, we qualified 3 teams— 675A, 675B, and 675D— to the 2019 VEX Worlds Competition. We hope to continue being a strong foundation of our robotics club and grow our influence around our local community.

Our VEX Robotics division has worked very hard since its establishment to not only educate its own members but also the community around them. Since then they have set up a VEX Program at Couch Middle School and have helped other middle schools advance to the next level of competition. VEX has also evolved to become the most popular robotics program at our school with 7 different teams. There are also a numerous amount VEX Classroom kits that are used for instructional purposes during our robotics class. The VEX program at our school has greatly grown over the past few years and our teams have been very successful bringing home trophies from nearly every competition. All VEX teams are greatly involved in the community through local outreach programs to other robotics clubs in Gwinnett County. 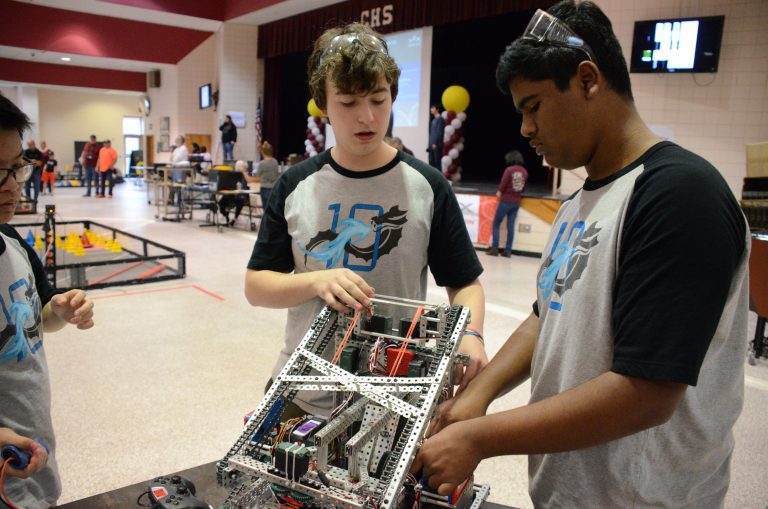 The 2019-2020 game is called Tower Takeover and is about placing cubes in certain zones and in towers. We have 6 teams participating in this challenge. This season is still active and we do not have results yet.

The 2018-2019 game was called Turning Point. This game was one of the more aggressive games. Two alliances of two teams would fight over control of flags and caps. Balls were flying everywhere and ever moment you can hear a flag being hit or a robot being tackled.